Matt Shepard Is a Friend of Mine

An intimate portrait of Matthew Shepard, the gay young man murdered in one of the most notorious hate crimes in U.S. history. Framed through a personal lens, it's the story of loss, love, and courage in the face of unspeakable tragedy.

Matt Shepard is a Friend of Mine is a powerful feature documentary about Matthew Shepard, the gay young man who was tortured and murdered in one of the most notorious hate crimes in U.S. history. Directed by Michele Josue, a close friend of Shepard’s, the film revisits the shocking case with never-before-seen photos, rare video footage, and new revelations about Shepard’s all-too-brief life. Director Michele Josue will be in Athens to present the film and discuss with the audience.

With the support of the US Embassy in Athens

“OUR FILM AND THE PEOPLE IN IT ALL BEAR WITNESS TO THE SIMPLE FACT THAT MATT SHEPARD WAS A GOOD PERSON—AN AMAZING PERSON WITH A BRIGHT FUTURE WHO TRAGICALLY FELL VICTIM TO THE IGNORANCE AND HATRED THAT PERSISTS IN OUR SOCIETY TODAY.” -MICHELE JOSUE, DIRECTOR

Fifteen years ago, just past midnight on October 12, 1998, my dear friend Matt Shepard died from a vicious anti-gay attack at the hands of confessed homophobe Aaron McKinney and his accomplice Russell Henderson. Matt’s death opened the world’s eyes, including my own, to the hate and inequality the LGBT community struggles against to this very day.
I was 19 when Matt died and his loss was devastating for me. It’s a hard thing to understand, but as his story became an international news event, my heartbreak and sense of loss only grew as my friend Matt was replaced by “Matthew Shepard,” an historic figure and icon that will forever be associated with unspeakable violence and hate. And as the media stripped my friend of his humanity, I made a promise to myself that when I was emotionally and artistically ready, I would share, with the world, who Matt really was — in the only way I knew how, through film.
So three years ago, in 2010, after close to a year of research and intense discussion, I, along with a very small team, set off to make “Matt Shepard Is a Friend of Mine,” a film that would recapture the Matt the world barely knew. During the course of these years, I traveled all across the U.S. as well as Switzerland and Morocco to film important people and pivotal locations from Matt’s life. We made numerous trips to Laramie, Wyoming, where we photographed evidence from Matt’s attack. We interviewed the exemplary law officials who were involved in his case, including Undersheriff Rob DeBree, who painstakingly walked us through every detail of that fateful evening’s events. We filmed everyone from Matt’s parents, his closest friends, teachers, and mentors, to the bartender who last saw Matt and his murderers at the Fireside on October 6, 1998.
The people I chose to be featured in “Matt Shepard Is a Friend of Mine,” many of whom are also mutual friends of mine, all had close relationships with Matt and knew him at various points in his all-too-brief life. Collectively, they construct a truly encompassing and intimate portrait of Matt as he really was—a complex, sensitive, gay young man who worked hard to find peace and his place in the world. Through their vivid recollections of Matt, his joys and struggles, they reveal a young person, struggling to come of age, who is no different than any of us.
While Matt’s death did open my eyes to a world that could be so hostile and cruel, in many ways, the opportunity to tell Matt’s story has also showed me how incredibly good, beautiful, and just the world can be. Matt’s story includes exemplary police work, tireless activism, and the legislative victory of the Matthew Shepard and James Byrd Jr. Hate Crimes Prevention Act. His story shows us how love overcomes hate, and mercy surpasses cruelty and intolerance. Finally, there is the power of “Matthew Shepard,” Matt’s legacy to inspire current and future generations to be proud of who they are and to live their lives with courage, compassion, and forgiveness.
As a filmmaker and Matt’s friend, I feel extraordinary gratitude to be able to tell his incredible story and a tremendous obligation to depict him honestly, as the flawed, yet wonderful human being he was. For this reason, it is heartbreaking to me that the dehumanization and victimization of Matt continues to this day in the form of outrageous conspiracy theories and disgraceful character assassinations, which can only be motivated by a reckless opportunism and a blatant disregard for any sort of acceptable journalistic standards.
Now more than ever, our film stands as a witness to what actually happened the tragic night of October 6, 1998 and, more importantly, to the innately good, kind, and big-hearted person Matt was. Our film and the people in it all bear witness to the simple fact that Matt Shepard was a good person—an amazing person with a bright future who tragically fell victim to the ignorance and hatred that persists in our society today.
As a storyteller, I am truly grateful to have the opportunity to tell Matt’s story in the honest, sensitive, and dignified way it deserves to be told. As Matt’s friend, I am forever grateful to have this opportunity to stand up for him, alongside his family and friends and countless supporters around the world, as he is not here to stand up for himself. 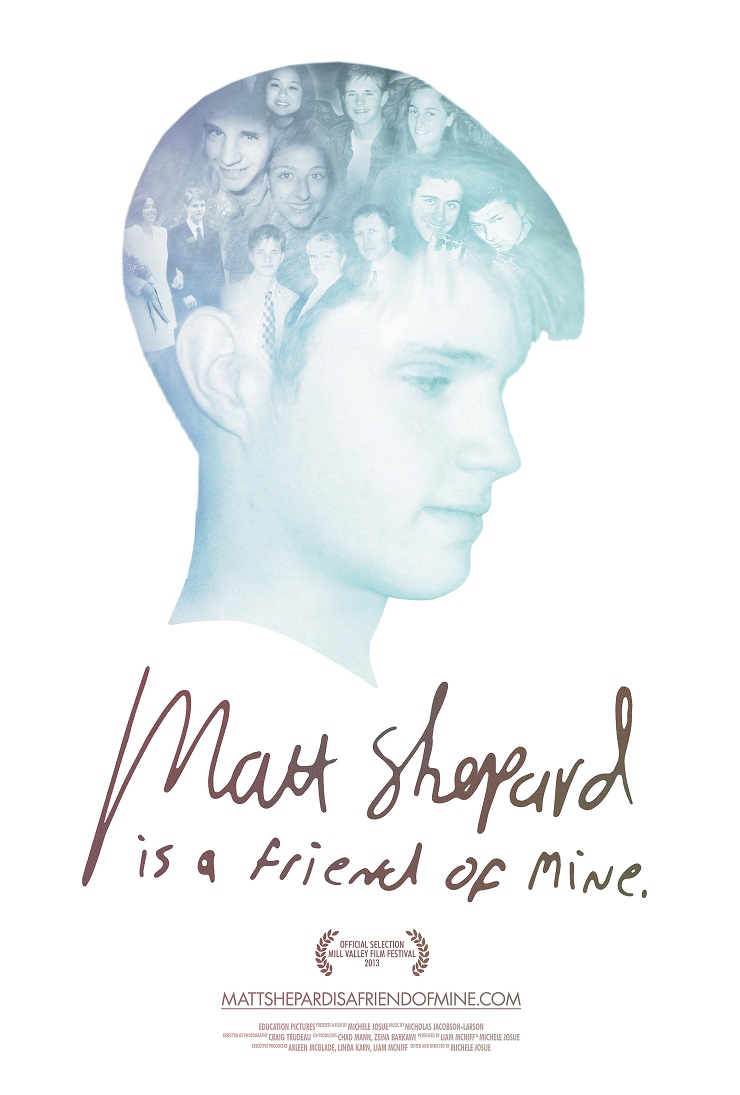 Matthew’s Story
The story of Matthew Shepard began on December 1, 1976 when he was born to Judy and Dennis Shepard in Casper, Wyoming. He went to public school in Casper until his junior year of high school when he moved with his family to Saudi Arabia. Matt had to finish his high school education at The American School in Switzerland because there were no American high schools in Saudi Arabia at the time. In both high schools, he was elected by his peers to be a peer counselor. He was easy to talk to, made friends easily and actively fought for the acceptance of all people.

Matt had a great passion for equality. His experiences abroad fueled his love for travel and gave him the chance to make many new friends from around the world. Matt’s college career eventually took him back to Wyoming where he studied political science, foreign relations and languages at the University of Wyoming in Laramie.

The horrific events that took place shortly after midnight on October 7, 1998 would become one of the most notorious anti-gay hate crimes in American history and spawned an activist movement that, more than a decade later, would result in passage of the Matthew Shepard and James Byrd Jr. Hate Crimes Prevention Act, a federal law against bias crimes directed at lesbian, gay, bisexual or transgendered people. Two men, Aaron McKinney and Russell Henderson, abducted Matt and drove him to a remote area east of Laramie, Wyoming. He was tied to a split-rail fence where the two men severely assaulted him with the butt of a pistol. He was beaten and left to die in the cold of the night. Almost 18 hours later, he was found by a bicyclist who initially mistook him for a scarecrow.

Matt died on October 12 at 12:53 a.m. at Poudre Valley Hospital in Fort Collins, Colorado with his family by his side. His memorial service was attended by friends and family from around the world and garnered immense media attention that brought Matt’s story to the forefront of the fight against bigotry and hate.

The life and death of Matthew Shepard changed the way we talk about, and deal with, hate in America. Since his death, Matt’s legacy has challenged and inspired millions of individuals to erase hate in all its forms. Although Matt’s life was short, his story continues to have a great impact on young and old alike. His legacy lives on in thousands of people who actively fight to replace hate with understanding, compassion, and acceptance.

Matt Shepard Is a Friend of Mine