Are Greek people still shocked by an act of affection and intimacy coming from a homosexual (lesbian) couple in public?

Are Greek people still shocked by an act of affection and intimacy coming from a homosexual (lesbian) couple in public? Is public trust and tolerance, demonstrated to the private moments coming from a straight couple, equally shared to lesbian couples, as well? Kiss-in, follows a lesbian couple kissing in Varvakios Agora and Monastiraki square, capturing people’s reactions and the effect they have on the couple.

GreekTV.com has commissioned to CineCollectiva, a collective of lesbian and bisexual women the creation of a doc reflecting an issue from the life of LGBT people in Athens. Discussing about homophobia and prejudice with lesbian women, many complained that expressing intimacy to their partners, in public, has caused from intense staring by people around them to bullying and homophobic outbursts.

Few members of CineCollectiva (Σινεκολεκτίβα), an open Facebook Group that has been formed by women active in the field of Greek Cinema either professionally or amateurly. Their main goal is to empower themselves as female artists and creators through collectivity.
Couple: Daphne and Irini
Creative Producer: Nina Foufa
Director – Host: Rebecca Varnali
Camera: Ypatia Kornarou, Sofia Zachariadi
Produced by GreekTv.com
Producer: Eirini Steirou 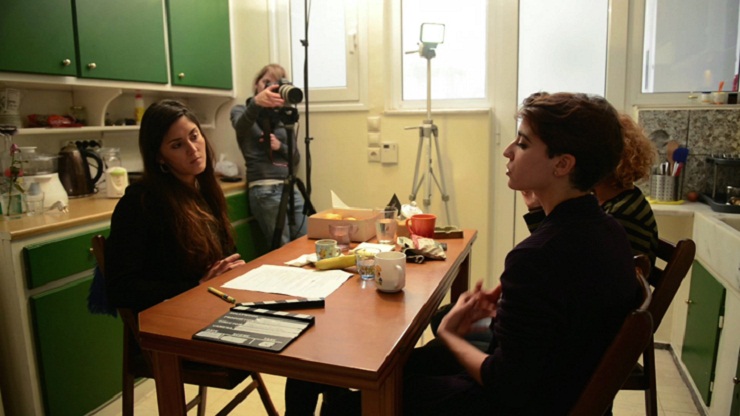