Boy Meets Girl is a funny, tender, sex positive romantic comedy that explores what it means to be a real man or woman, and how important it is to live a courageous life not letting fear stand in the way of going after your dreams

Eric Schaeffer’s new film, BOY MEETS GIRL is a poignant, sexy, romantic coming of age comedy about three twenty year-olds living in Kentucky: Robby, (Michael Welch, Twilight) and his best friend since childhood, Ricky, a gorgeous transgender girl, have never dated. Lamenting the lack of eligible bachelors, Ricky considers dating a girl. In walks Francesca, a beautiful young debutante waiting for her Marine fiance to return from the war. Ricky and Francesca strike up a friendship, and maybe a little more, which forces Robby to face his true feelings for Ricky. This is a sex/human positive modern fable and identification with it’s story crosses all gender and sexual orientation lines.

Part of an interview with trans actress Michelle Hendley from Advocate.com

Previous to your acting career, you had a YouTube channel where you shared your transition details. Do you feel that helped you prepare to be in front of a camera as an actress?

Yes! It seems silly to think that a bunch of YouTube videos would help prepare me for my film debut, but it definitely cut my nerves in front of the camera a bit.

Boy Meets Girl is your first feature film. How did you get involved in the project?

Eric [Schaefer, the director] found me via YouTube and told me about his project. At first I thought he was just some dude on the Internet with creepy intentions, but after checking out his [page on]Internet Movie Database and Skyping with him I realized he was a real deal director. I was very excited to be a part of the movie.

How does your life compare to the life of main character Ricky? Are they similar?

There are quite a few parallels between Ricky and I. For one thing, we are both young trans women. We also come from loving and supportive communities and families, and live pretty “normal” lives. We work 9-5 jobs, cry about boys, and probably spend too much time trying on clothes and looking at ourselves in the mirror. However, Ricky carries a dark past that has made her a little more edgy / salty than myself.

How much creative input were you able to provide to director Eric Schaeffer in order to produce such a true-to-life character?

The story and character developments of Boy Meets Girl were Eric’s creations, but he and I collaborated when it came to Ricky’s character as a trans woman. Eric used my personal perspective and experiences to keep many of the issues discussed in the film authentic, and it was his attention to detail and willingness to listen to my input that made this project so amazing for me.

To what level of transphobia have you experienced in your life as compared to what your character experienced?

While I have yet to experience any physical violence because of my trans identity, I was teased and bullied in my formative years. Kids can be mean, and I think everyone faces some discrimination/ bullying growing up. I was just targeted for being very feminine. Nowadays I don’t really deal with petty teasing but there are individuals who simply refuse to accept me (or any trans person) for who/what I am. I do not give these sorts of people much mind though, to be honest. I don’t have time for all that negativity.

Although I imagine the tears you cried when Robby said that you “weren’t really anything, not a boy, not a girl…” were a part of the script, did this trigger something in you that made the tears, and the emotional response, real?

Absolutely. This was by far one of the more challenging scenes for me. Eric needed me to break down and really feel the words Robby was saying to me, and at first all I could do was laugh! It was very difficult for me to open myself to hear something so deeply hurtful — something I personally never let myself believe over the years. My defense mechanism was to laugh and make light of it, but after so many reads of “you aren’t anything,” I finally caved and the tears came in torrents. It was rough, dark, vaguely spiritual, and I slept hard that night [Laughs].

The final nude scene did not feel gratuitous and it fit in to the story line well. How did you feel about being asked to do full frontal nudity and ultimately, how easy or difficult was it to do?

I am so, so happy that the nude scene has been received so well, and not as some gratuitous, shock-value, sleaze shot. Eric let me know about the scene very early on (maybe within the first couple email exchanges, now that I think about it), and I was all for it from the get-go. I think there is a lot of mystery associated with trans bodies. The general public does not understand what it is to be a transgender person, and our bodies are often fetishized as something taboo and strictly sexual. It was important to treat this scene delicately, and I want audiences to see a trans body for what it is. It’s not monstrous, it’s not threatening anyone, it’s just there and it’s mine and it’s beautiful. 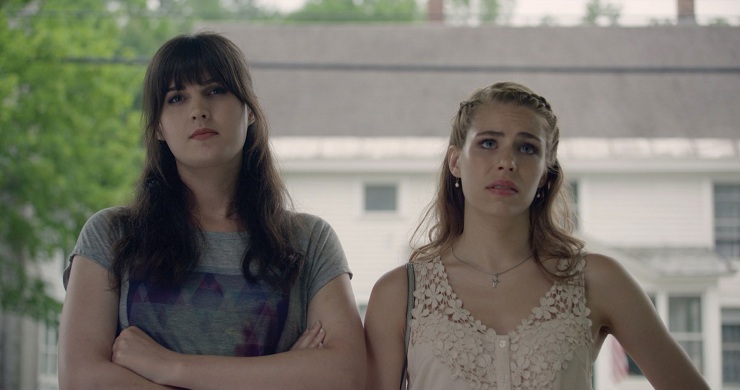 With the support of the USA embassy in Athens