Outview Film Festival turns eight this year and returns to the Greek Film Archive on the 15-15 May. Eleven days of queer cinema, screenings, events, workshops, parties and awards!

8th Outview Film Festival
“It doesn’t go into politics, but is political through its art”

“I don’t want to go into politics, I wish to remain dedicated to my man and my books” Auguste Corteau 2014

“I don’t want to go into politics” sounded to me as “I don’t want to get married” and “ I wish to remain dedicated to my man and my books “ sounded to me as “I want to have my revolution”.
A sentence which is funny just because if it was said by any straight man it would have just been cliché. We live in times where things change on a daily basis. I laughed very hard when I heard a friend of mine say “Even I, as a straight woman, haven’t said that I will remain dedicated to my husband, how bourgeois is what Corteau said?”
But what Is bourgeois in our days? When lesbian.gr, which surpasses 2.000.000 views per month and 54% of those views are straight couples and men and at the same time gay and lesbians are demanding for their rights to marry and adopt, whereas the straight community has proven and are saying that marriage doesn’t equal with happiness. Also we see boys and girls from the Eastern block are the object of affection for a large portion of our population and what we now call bourgeois can be a queer prospect for a better society. Maria Cyber

The 8th Outview Film Festival is the best we have presented so far. With over 70 films, Masterclass, workshop, events and even more awards, official guests, artists, collaborations with institutes and embassies and mainstream media, we can safely say that the festival is one of the cultural highlights of Athens even in this austerity. This year’s Outview Film Festival falls with the current elections. Even though Outview will not go into politics, it remains political in a country where unfortunately the difference in sexual orientation is still not accepted. This is the reason that we have chosen as a slogan a statement by an openly gay author which sparked a “hatespeech” by one of the most well known greek reporters and we are eagerly anticipating on justice being served. Have a taste of the wonderful film programming we have prepared for you and join us in believing that we can create a better society which encompasses people of all orientations!

This year’s opening film is with the collaboration of the French Institute. The film Eastern Boys and the short film Price Tag. French actor Olivier Rabourdin, who stars in both films, will be here in Athens to open the festival.

Synopsis
They come from all over Eastern Europe: Russia, Romania, Ukraine. They are Eastern boys. The oldest appear no more than 25; as for the youngest, there is no way of telling their age. They hang around the Gare du Nord train station in Paris. They might be prostitutes, but there is no way of knowing for certain. Muller, a discreet man in his late fifties has his eye on one of them – Marek. One afternoon, Muller gathers his courage and speaks to him. The young man agrees to come visit Muller the following day, at his place. However the next day, when the doorbell rings, Muller doesn’t have the faintest idea that he has fallen into a trap.

Adam, a Roman Catholic priest in rural Poland, knows that he desires men and his embrace of the priesthood has been a flight from his sexuality. When he meets a particular young man, self-imposed abstinence becomes a heavy burden.

There will be a free screening of the documentary “Valentine Road” in collaboration with Rosa Luxemburg Foundation. The film exposes the homophobia, sexism, racism and the bullying in everyday American life. It also exposes the fallacies of a judicial system which is unable to deal with this reality. After the screening there will be a discussion with Colour Youth member Nelly Kaouni.
Award winning film “ Stranger by the lake” makes its way from Cannes to Athens.
A lot of greek participations this year as well. Young greek filmmakers will present to us their new body of work and we will see a teaser of Christos’ Voupouras upcoming film.
Multi award winning film “Out in the dark” will examine the relationship of a Palestinian and Israeli gay couple and the dangers that surround such a relationship.
Anna Margarita Albelo’s new film with star Guinevere Turner, “Who’s afraid of Vagina Wolf”, will have its national premiere at Outview. A movie about lesbians, their confusions and their love affairs.
The personality of legend Gore Vidal will be seen in the excellent documentary “Gore Vidal: United Stated of Amnesia”.
We will learn all about Alan Turing, the mathematical genius who helped to end WWII. Despite his contributions he was subjected to chemical castration because he was homosexual. We will find out about his life in the film “Codebreaker”.
A crowd pleaser from Germany “Free Fall” about the love affair of a young policeman who must choose between his pregnant wife and his new male lover.
We will be enchanted by the music of “Antony & the Johnsons” in the documentary, “Turning”.
We will laugh with the queer comedy “G.B.F.”.
We will get emotional with the characters of indie Sundance favourite “Pit Stop”.
In “The Dog” we will find out about John Wojtowicz, the man who inspired the film DOG DAY AFTERNOON with Al Pacino.
We will also find out about queer trans icon Buck Angel in the documentaries “Sexing the Transman” and “Mr. Angel”. 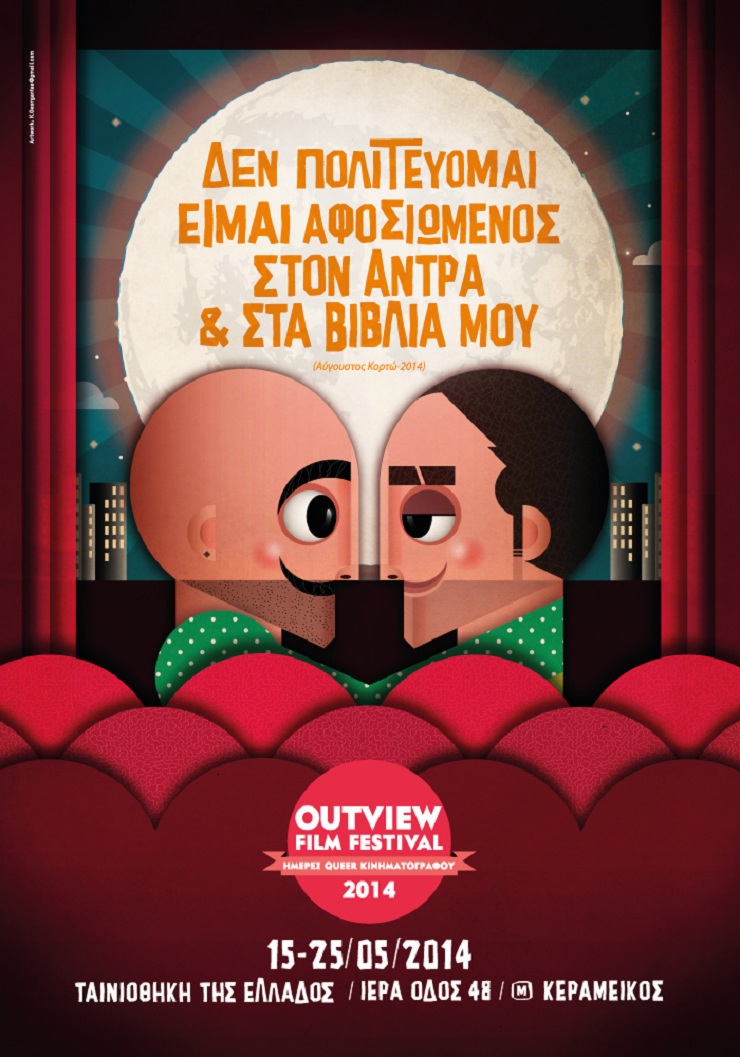 Art exhibition “Your experience matters” by Colour Youth and curator Giorgos Striftaris.
Vagina Wolf Party Women’s Party on the 17th May.
House of Field Party, on the 20th May with official guest Patricia Field!
Meet the Beavers Party, on the 22nd May at Beaver.
Healing By Sharing: On the 23rd May at 20.30 there will be a video projection and a panel where we will discuss on an empirical approach to living with cancer.
Kink Party on the 23rd May. Right after the screening of KINK by Christina Voros there will be a kinky party and show with Mistress Lola at The Apartment club.
Alexander Sauna Party, on the 24th May right after the screening of documentary AGE OF CONSENT which is about fetish London bar “The Hoist”.
Award ceremony and live music at Shamone Bar on the 25th May with special guests Andriana Babali, Etten and Giorgis Christodoulou.

The team of Antivirus magazine will give out the Award for Best Short Film Award.

The award ceremony will take place on the 25th May at Shamone Bar.

And there is also the Audience Award which is decided by the audience!